The most recent Art Academy crit group was a long session, enabling presentations to be made of two ongoing projects being undertaken by Art Academy members, Natalie Bradbury and Jen Wu, and allowing for in-depth discussion of these projects. Natalie Bradbury explains: 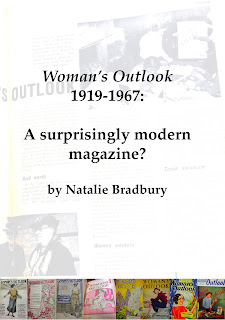 Whilst I am not an artist and therefore don't have a practice as such, I thought that the Art Academy open crit might be a good time to practice a talk I have been working on called 'Woman's Outlook: A surprisingly modern magazine?', which I am going to be doing at the Rochdale Pioneers Museum next Thursday evening (21 March). I really needed a run-through as I have never spoken in public before.

I started by explaining that the magazine Woman's Outlook was published by the Co-operative Press between 1919 and 1967 along with a number of other specialist magazines aimed at the co-operative movement. I explained that my interest in magazines is partly linked to publishing my own zine, the Shrieking Violet, as well as my love of twentieth century history and interest in Manchester's historical reputation as the 'Fleet Street of the North' (Woman's Outlook was based first in Manchester city centre, then in Old Trafford). I spent several days reading through volumes of Woman's Outlook in the National Co-operative Archive in Manchester and found it really hard to focus my findings down because of the amount of interesting information I found! However, I decided to discuss the ways in which I thought Woman's Outlook was modern as a magazine – firstly, because I think that much of the content, such as recipes, fashion, fiction and articles about issues affecting women, isn't that different to the subjects covered in women's magazines today; second, because many of the challenges facing society today, such as unemployment, lack of affordable housing and challenges to women's reproductive rights, are worryingly similar to those experienced in the early-to-mid-twentieth century; and finally because the magazine's political and editorial stance appeared to be ahead of its time on a number of issues such as abortion, family planning and divorce.

I had initially tried to make a powerpoint to present my talk, but really struggled so decided to go back to what I knew and present the history of Woman's Outlook and some of the key themes which emerged in the form of a magazine. I then showed some examples of pages from the only modern-day women's magazine I read, Stylist, to show what sorts of topics are thought to be important to women today. Each person who was present at the crit was given a copy of my magazine about Woman's Outlook, and I also projected the pages of the magazine digitally via PDF hosting site Issuu, which allowed me to flick through the pages as I talked.

Whilst the audience was quite different to the one I am expecting at my talk – who I am anticipating will have more of a specialist interest/prior knowledge of the co-operative movement and its history – the crit was a really good opportunity to practice public speaking, and gain feedback on how I presented my ideas. People who heard the talk seemed to be really interested in the history of the magazine, and some of the themes I highlighted such as the shift towards a consumer society in the 1950s, higher living standards and the move towards individualism also prompted some good questions about things such as advertising and a really interesting discussion about the role of male/female-targeted magazines today. Of particular interest was the way in which the co-operative women's movement was a means of self-education; something that as members of the Art Academy we are all interested in! We discussed the lack of emphasis today on skills such as public speaking, which the co-operative women's movement aimed to instill in its members.

One pertinent suggestion was that the type of feminist viewpoint espoused by Woman's Outlook is now seen more on blogs such as Jezebel and the F-Word than in printed magazines; unlike magazines, most blogs are not dependent on advertising to remain in print and therefore do not have to avoid being too controversial. Importantly, we discussed the extent to which Woman's Outlook and present-day magazines such as Stylist are really comparable – although some of the content may appear similar on the surface, there are key differences. Woman's Outlook was a mouthpiece for politics and campaigning, whereas Stylist's occasional investigative and issues-based content mask the fact it is really just one big advert for consumer lifestyles. Additionally, Woman's Outlook was paid-for and had a very defined audience, whereas Stylist is handed out free. I also took on board some comments such as showing bigger versions of pictures of pages/covers from Woman's Outlook.

We then returned to more of an art-based discussion, as Manchester-based artist Jen Wu presented and projected images of her ongoing project 'The Wall'. Jen has been awarded money from the Chinese Arts Centre and Henry Moore Foundation and is currently in the process of applying for Arts Council funding to realise the project, which aims to stabilise a brick wall on the derelict Old Bank Theatre on Chapel Street, Salford which is due to be knocked down along with a number of other buildings as part of the ongoing regeneration of the area. It is hoped that one redbrick wall will be retained, then bricklayers and members of the local community will be invited to help dismantle it and rebuild it elsewhere in the vicinity in an act of 'creative DIY', accompanied by celebratory 'rave' parties (this references Jen's past projects, which have involved working with musicians and DJs). The wall will function as a public sculpture, but could also be the first wall of something longer-lasting, for example a new facility like a community centre. The focus of the project is not just on demolition, but action and rebuilding, a cycle of activity that will show how people can physically change their area and celebrate the past at the same time as looking to the future.

Jen, who arrived in Manchester in 2011 to undertake a residency at the Chinese Art Centre, described the evolution of her practice, from getting into sculpture during her undergraduate degree in the United States to moving to the United Kingdom to do a Masters, starting temporarycontemporary, a successful artist-led space in Deptford, south London and then transforming the visitor experience of some of London's established art institutions such as the ICA and Royal Academy by, for example, turning the ICA into a nightclub. Jen traced key events in her development as an artist, including going to China on residency and becoming interested in the way industry had been transported to China, as well as influences such as music and American land art.

When she came to Manchester, Jen started researching the history of former Manchester landmarks, now demolished, such as the Hacienda nightclub (now rebuilt as apartments) and the notorious Hulme Crescents, once the venue for famous parties, becoming interested in narratives of regeneration, demolition and starting over again. She started to document the demolition of buildings, a process she describes as 'looking like warfare', and became interested in the way sites acquired value when solid matter such as buildings had disappeared. One such building was the former Salvation Army centre Stella Maris near Islington Mill in Salford, where Jen got to know the demolition crew and the security guard, who let her take bricks from the demolition of the building. This led to Jen taking numerous buses around Salford to look at various walls, and realising how much of Salford is made of brick.

Jen explained that she is interested in the ways in which spaces where people used to come together, such as nightclubs, have been destroyed, and thought that moving a wall would be a way to bring people together at the same time as acknowledging the DIY spirit operating in places such as Islington Mill. She explained that the project is constantly shifting, and sometimes seems impossible, but she doesn't think it could take place anywhere else. The Chapel Street buildings are due to be demolished soon, but Jen hopes that the project can coincide with Manchester International Festival in July, when events will also be taking place at the Mill. Jen's past career was an important part of the way in which the project was presented to the group, and we discussed how Jen should bring this development of her practice out in her application for funding. We also noted that there are a diverse range of people living and working in the area around Chapel Street, from council residents to tenants of new flats and artists working at the Mill.
Email Post
Labels: art Chapel Street co-operatives feminism history islington mill islington mill art academy magazines public art publishing regeneration salford women 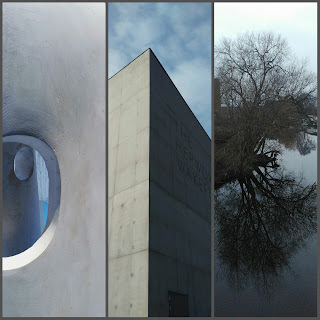 Hepworth visit and some questions about curating